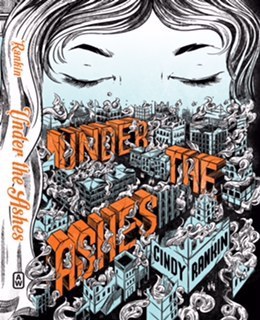 In a city shaken to the ground, she must find a way out.

Cindy Rankin, writer and former teacher, lives on the Central Coast of California with her husband. Check out the site below to read Cindy's recent interview on the Albert Whitman blog about her debut novel, UNDER THE ASHES, (A. Whitman, 2016). Now available at booksellers everywhere.
https://albertwhitman.wordpress.com/2016/10/24qa-with-cindy-rankin/

My father was in the Air Force so I grew up all over the place: Nebraska, England, Germany, Virginia, and Texas. My dad retired to Sacramento, California, and it was nice to stay put for awhile. Then I married my college sweetheart, who joined the Air Force, and off we went to Michigan where we had a baby boy. Next, we were sent to Italy where I worked as a writer/editor for the Public Affairs Office at Aviano Air Base. When our daughter was born, I became a stay-at-home mom for a bit.

Returning to California, we spent four years at Travis Air Force Base. I became a substitute teacher and also wrote feature articles about our military community for the Fairfield Daily Republic newspaper. We moved once more when my husband took a civilian job in San Luis Obispo County, and Paso Robles became the first, actual hometown we chose for ourselves.

We raised our children here, made friends, and fell in love with the area and its history. My curiosity and creative energy took root. I wrote freelance newspaper and magazine articles, and again worked as a substitute teacher. My imagination fed on everything I learned and experienced.

Luckily, I found others here who liked to write and I joined several critique groups where writers share their work and receive feedback. It’s wonderful to be with people who work at the same craft and have the same goal of improving. Writing is essentially rewriting until you get the words right. The tricky part is knowing when the words you’ve selected are the best ones.

The more I wrote, I realized making up characters and predicaments for them to face was my favorite thing to do. I stopped writing articles and began creating stories. The most exciting part of fiction for me is wondering, what if this happened? then writing to discover how it all turns out.

Because I never had a hometown of my own until I was 37 years-old, I happily planted my heart in Paso Robles where it was nurtured in every possible way. So it’s only natural my first published novel would begin and end here, but in the middle I used my research about San Francisco’s 1906 Great Quake along with a whole lot of imagining about what would happen if a young girl from my town went through that catastrophe.